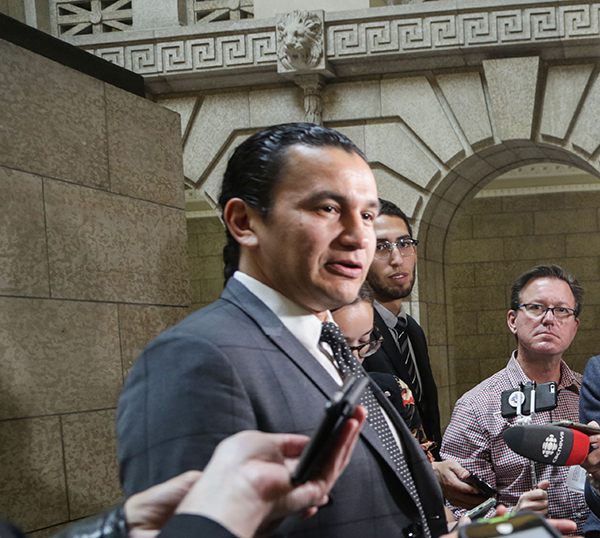 The Manitoba NDP stood today with over forty students from the University of Manitoba’s Inner-City Social Work Program opposed to the Pallister Government’s cut to the ACCESS Bursary.

“ACCESS bursaries ensured that students living in poverty can go to college and university to change their lives and their family's lives for the better and forever” said leader Wab Kinew. “Eliminating the ACCESS bursary puts more barriers in the way. It’s a mistake.”

The first ACCESS bursaries began in 1972. Until they were cancelled in 2018, Access Bursaries provided targeted financial assistance of up to 60% of a student’s needs. The bursaries were tailored to northern, Indigenous and low-income students with significant financial need. Research with low income and underrepresented groups finds the fear of significant debt as a very significant deterrent to pursuing post-secondary education.

“The ACCESS Bursary and program are active solutions to poverty, ensuring access to education that would otherwise be out of reach” said ACCESS student Christine Rossman. “These bursaries have a transformational effect on ACCESS students, and they need to be restored.”

Kinew noted that many ACCESS students began their studies with the understanding that the majority of their costs would be covered, that tuition would increase no more than the rate of inflation and that the Manitoba Tuition Fee Rebate would be available to them when they graduate to help them recover some of their remaining debt. Now both the ACCESS bursary and the rebate have been cut and tuition is going through the roof.

“A deal is a deal. Cutting bursaries while students are in the middle of their degree is simply bad faith on the part of the Pallister Government,” Kinew said. “ACCESS students now face tens of thousands of dollars of debt that they did not anticipate when they started their studies. That’s simply not fair.”

The Pallister Government’s sudden cut to the ACCESS bursary are similar to those made by the Filmon Government in the 1990s. A judge later found the province of Manitoba in breach of contract for cutting off the bursary while students were midway through their programs.