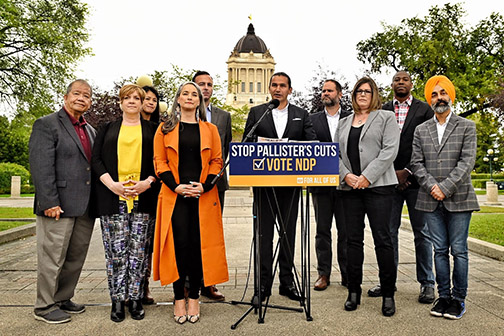 WINNIPEG — New confidential documents reveal key details of the Pallister PCs’ secret plans for more job losses and more radical changes to health care that are being hidden from Manitobans until after the election.

In September 2018, the Pallister government announced they were creating a new provincial clinical plan, which would be “complete by the summer of 2019.” Numerous changes have been initiated which have been kept hidden from the public.

The Manitoba NDP has obtained portions of a confidential draft written by KPMG. It lays out a plan that calls for firing at least 160 more health care professionals responsible for recruitment and retention of nurses, doctors and other health care workers, as well as occupational health and safety rules.

“Brian Pallister is hiding his secret plan for cuts across our health care system until after the election. This is just a tiny glimpse into the cuts he, KPMG and other consultants have planned for health care across the province,” said NDP Leader, Wab Kinew. “Manitoba families have the right to know what Brian Pallister and his high-priced consultants are planning to cut next from our hospitals and health services.”

This secret plan comes in the wake of reports of increased workplace violence against nurses, massive increases in mandatory overtime and wasted tens of thousands of dollars on an insulting ad campaign.

The leaked documents cover only a small portion of what’s to come from Brian Pallister. The PCs have stated the series of clinical plans will include not only more changes to emergency care, but also other services like critical care, cancer care, surgery and obstetrics.

“Pallister needs to come clean with Manitobans about his plans for cuts – he’s giving hundreds of thousands of dollars to KPMG while hiding his plans for cuts from families,” said Kinew. “The NDP is the only party that can stop Pallister’s health care cuts and protect the front-line health care all of us depend on.”