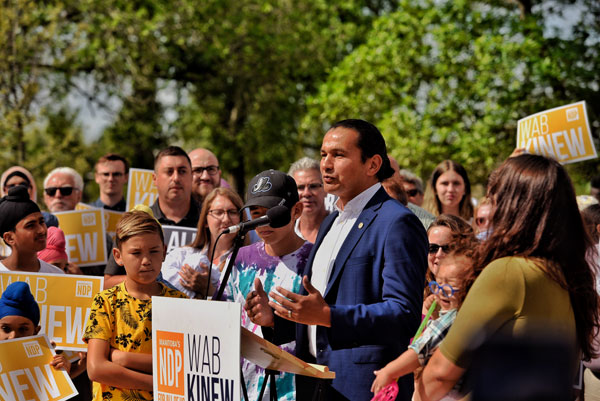 Winnipeg, MB— Today the Manitoba NDP became the first party to launch its campaign, unveiling leader Wab Kinew’s tour van at a rally in St Vital Park. Even though Brian Pallister won’t tell Manitobans when the election campaign will officially start, the crises in health care and other challenges facing Manitoba families are too urgent to wait. It’s time everyday Manitobans had an opportunity to make their voices heard on Pallister’s cuts, and to vote for a leader who’s in it for them.

Kinew and his wife, Lisa, stood with dozens of supporters, including Manitoba NDP candidates. Kinew told supporters that this campaign is about health care. Only the Manitoba NDP can be trusted to stop the cuts and fix the damage Brian Pallister has caused. And it’s about choosing between Brian Pallister, who’s only it for those at the top, and Wab Kinew, who puts everyday families first.

“Manitobans are telling me they are worried health care won’t be there when their family needs it,” said Kinew. “They are worried their kids won’t get careers that allow them to build a future here in Manitoba. And they are feeling the pinch because Brian Pallister has made their lives more expensive. After all this, there’s no way families should have to pay Pallister’s planned health premiums — a new tax on health care that could cost $900 per adult.”

The NDP will release its comprehensive and fully costed election platform tomorrow. The platform will offer Manitobans better choices than the cuts and chaos offered by Pallister.

The NDP has already nominated 54 candidates, with two more nominations scheduled for tomorrow. The final candidate to be nominated, completing a full slate of candidates, is NDP leader Wab Kinew, who will be confirmed as the NDP candidate in Fort Rouge this weekend. All of them are energized to work for a better Manitoba for all families.

A new ad was also launched online and on tv, in which Wab Kinew is talking to Manitobans about his values and priorities.

Kinew will visit all regions of Manitoba during the campaign.