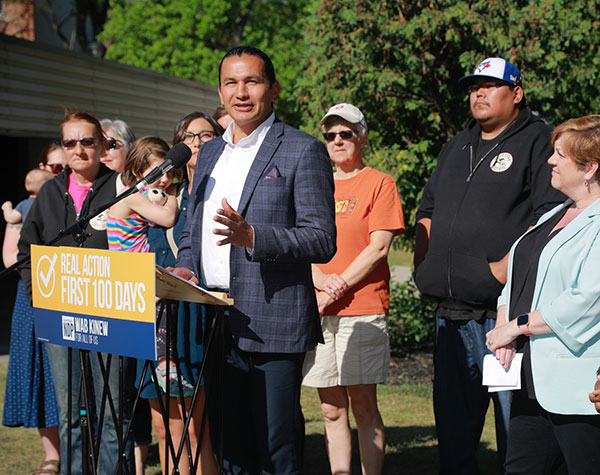 Will work with everyone to fight the crisis, including: cooperating with Main Street Project; opening downtown Winnipeg safe consumption site and managed alcohol program; appointing Minister Responsible for Mental Health and Addictions

WINNIPEG — Wab Kinew would take immediate, effective action to tackle the addictions crisis that has affected communities across Manitoba. Kinew stood with Wolseley candidate Lisa Naylor and local residents in Vimy Ridge Park, in an area that has seen an increase in property crime and drug use as a result of addictions. Kinew committed to actions to address the public health and crime issues associated with addictions, not just in the inner city but in surrounding neighbourhoods as well.

The NDP would fund a safe consumption site and a managed alcohol program, both located on Main Street in downtown Winnipeg. They would offer opportunities for people with addictions to get access to health care and treatment, and prevent disease from spreading. They will complement other prevention, harm reduction, treatment, and crime reduction strategies, including a meth intervention program at Main Street Project. Together these measures would reduce crime and dramatically reduce the number of used needles found in public spaces such as parks and playgrounds. They would also help more people with addictions receive health care and referrals to health and social services, including addictions treatment.

Safe consumption sites have been employed successfully in other Canadian cities, saving the lives of thousands and reducing crime and disease.

“There is a serious addictions crisis in communities across Manitoba — meth addictions in particular. And the consequences have touched us all: some of us have experienced crime or violence as a result of the crisis. Tragically, some of us experience the loss of a family member,” said Kinew. “We have been pushing Brian Pallister on this issue, and he has resisted taking action every step of the way. His inaction got so bad that the chief of police took the extraordinary step of publicly calling him out.

“We have a real plan to fight meth. It’s a plan we developed by listening carefully to the people who know best: the nurses, doctors, counsellors, and police on the front lines. It will include real action in the first 100 days, including a program in cooperation with Main Street Project, and other measures to get addicts into treatment and allow police officers to get back to what they do best. Like many people, at first I was skeptical about a safe injection site. But the evidence is clear that they reduce crime and reduce harm — they save lives. We will not give up on kids.”

“We know these types of supports work, particularly for people with chronic addictions. These commitments will help people get the treatment they need while reducing the number of used needles in public spaces, protecting public health and keeping our communities safe.”