Kinew Would Restore Trust and Respect with Nurses Broken by Pallister 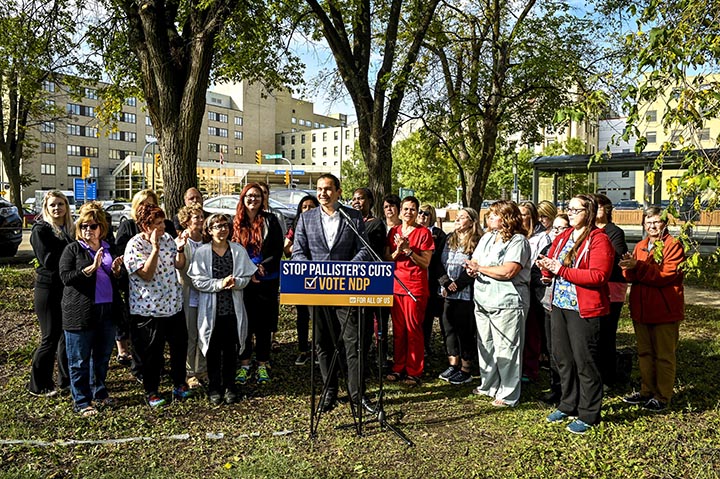 WINNIPEG — As part of his key commitment to fixing Brian Pallister’s health care crisis, Wab Kinew would reset the government’s relationship with nurses. This would include banning by legislation the use of mandatory overtime as a staffing tool.

“One consequence of Pallister’s rushed and reckless health cuts has been a dramatic increase in forced overtime for nurses,” said Kinew. “Everyone would agree that requiring a nurse to work overtime is reasonable in a public-health crisis, or during long surgeries. But using it routinely to fill the gaps caused by government spending cuts is bad for patient care, increases burnout, and is wasteful. These shifts are either being filled at a higher rate of pay, or they are short-staffed. Both options jeopardize patient and nurse safety. We will ban this practice by law.”

Forced overtime got so severe that nurses at Saint Boniface Hospital began tracking — on their own, though voluntary reporting — how much they were being forced to work overtime. (The government does not make such numbers available publicly.) According to these figures, the number of incidents of mandatory overtime per month in 2018 increased to 157.2, up from a monthly average of 27.3 in 2017, when Pallister started cutting health care.

“I’ve been hearing from nurses who have worked in Manitoba for years that they have never seen things worse. Patient care is suffering. Nurses are at the front lines of care, and we should listen to them and treat them with the respect they deserve,” said Kinew.

An NDP government would outlaw the use of mandatory overtime as a staffing tool, including by training and hiring more nurses. As Premier, Kinew would also meet regularly, face-to- face, with frontline health care workers to hear their perspective and concerns.