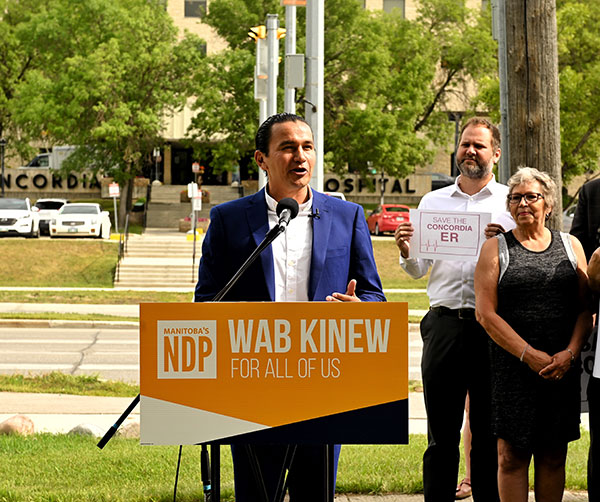 Winnipeg — Manitoba’s NDP would improve health care for Manitobans by re-opening the Concordia and Seven Oaks Emergency Rooms closed by Brian Pallister. This is one of the ways Wab Kinew would fulfill his key election commitment to fix Brian Pallister’s health-care crisis.

“I have been hearing from people across Manitoba how worried they are about the damage Brian Pallister has done to health care. That is the main issue in this election. Pallister’s rushed and reckless ER closures are a symbol of the bad choices he has made — choices that reveal how out of touch he is with the priorities of everyday families,” said Kinew. “We’ll end Pallister’s health care cuts and chaos, and repair the damage by listening to those on the front lines and putting patients first. That starts with reopening the Concordia and Seven Oaks ERs.”

Pallister has fired 500 nurses and closed three ERs. ER waits are up over 37% since Pallister started closing emergency rooms.

The ERs at Concordia Hospital and Seven Oaks closed suddenly in June and July, respectively. They had served families in fast-growing areas of north Winnipeg.

The choice in this election is clear: Brian Pallister will continue to cut health care and education, make life more unaffordable, and introduce a new health care tax on Manitobans that could cost $900 a year. Wab Kinew and Manitoba’s NDP will fix Pallister’s health-care crisis, create good jobs and address climate change while keeping life affordable.