Kinew Would Invest in Infrastructure and Growth 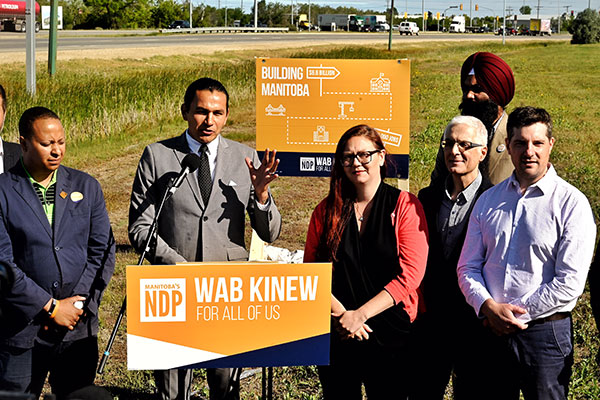 NDP would create 50,000 jobs by building roads, hospitals and schools

WINNIPEG — Manitobans would benefit from new and improved roads, bridges, schools, and hospitals resulting from a strong investment of $6.64 billion over four years in strategic infrastructure by Wab Kinew and Manitoba’s NDP. This level of investment would create 50,000 jobs, and would be $690 million better than Brian Pallister over the next four years. The benefits would ripple through the economy and help restore employment and growth numbers that have fallen significantly as a result of Pallister’s cuts.

Kinew introduced his overall infrastructure commitment while standing beside the Chief Peguis Trail. As an example of the kinds of projects this investment could fund, an NDP government will work with the City on shared infrastructure priorities such as the extension of Chief Peguis west, and the widening of Kenaston Boulevard. Such projects would benefit neighbourhoods in the north of the city by reducing traffic on neighborhood streets, which would make them more accommodating for public transit, walking and cycling.

Brian Pallister cut infrastructure investments immediately and dramatically. Between 2016/2017 and 2017/2018, Manitoba cut capital spending by 27.4%, according to the Parliamentary Budget Office. That was the biggest cut among all provinces. Since 2016, the Pallister government has cut infrastructure spending by a total of $1.135 billion from budgeted levels.

Pallister’s cutbacks on roads and highways have been so dramatic that last week Hugh Munro Construction, a local firm that had been in business for 60 years, auctioned off 1,200 pieces of heavy construction equipment. Chris Lorenc, CEO of the Manitoba Heavy Construction Association, has publicly expressed fears the cuts will kill the industry in Manitoba and allow the infrastructure deficit to reach insurmountable levels.