Kinew Would Deliver $15 Minimum Wage, Better Protections for Workers Who Get Sick 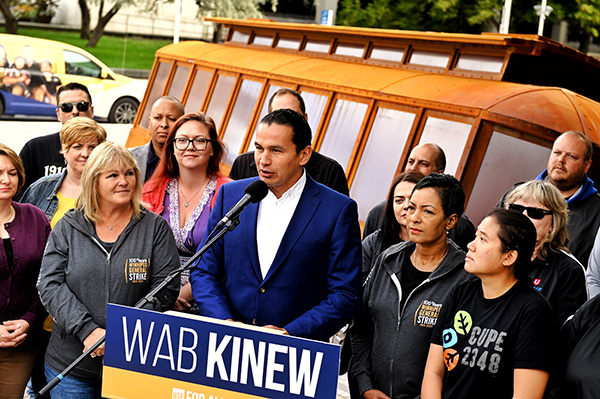 It’s time for a Premier who’s in it for all of us, not just those at the top

WINNIPEG — Wab Kinew marked Labour Day by announcing that, as Premier, he would make life fairer for working people in Manitoba, including raising the minimum wage to $15 / hour, and banning employers from requiring sick notes for short-term illnesses.

“I have never met anyone in Manitoba who feels it’s fair that someone who works full time should have to live in poverty. Yet that’s exactly the situation right now in Manitoba under Brian Pallister,” said Kinew. “We’ll change that. We will also ban sick notes for short-term illnesses. Requiring people to go to the doctor — or even an Emergency Room — to get a sick note to excuse a short-term illness is not only unfair to those people who should be home getting rest. It also wastes the time of doctors and causes unnecessary congestion and delays in the health care system.”

Kinew committed to the following:

• Strengthening the minimum wage to $15 per hour, because no one working full time should have to live in poverty;

• Prohibiting employers from requiring medical notes for absence due to illness lasting less than 72 hours;

• Making workplaces safer by hiring more workplace health and safety officers and restoring the Minister’s Advisory Council on Workplace Safety and Health that was cut by Pallister;

• Ensuring that people who go on Employment Insurance sickness benefits have their jobs protected; and

Implementation of the minimum wage increase would be designed to avoid unnecessary disruptions or job losses.