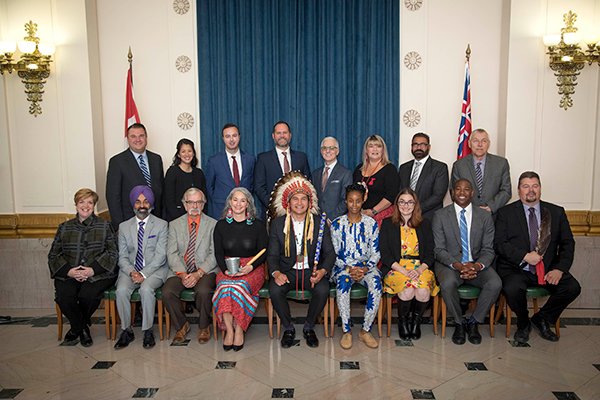 NDP’s Diverse Caucus Will Work for All Manitobans

The NDP caucus is one of the most diverse in Manitoba’s history with six women, five Indigenous people, two queer people and nine people of colour.

“Our new team is proud to look like Manitoba, and we plan to use every tool at our disposal to hold the Pallister government to account, ” said Leader Wab Kinew. “We will continue to oppose Pallister’s health care crisis, which has caused chaos for patients and health care workers. We will fight back against his plan to make deep cuts to education, which will hurt students and teachers. And we will do our part to help solve the climate crisis while keeping life affordable for families.”

After the ceremony and a brief reception, NDP MLAs will join thousands of students and young people in the General Climate Strike at the front of the Legislature.

Leader of the Official Opposition
Critic for Executive Council; Critic for Intergovernmental Affairs and International Relations

Whip for the Official Opposition
Critic for Municipal Relations and Infrastructure

Critic for Sport, Culture and Heritage;
Critic for Agriculture

Deputy Whip of the Official Opposition
Critic for Families (CFS)

Critic for Immigration and the Status of Women

Critic for Economic Development and Training and Trade; Spokesperson on Affordability Issues

Critic for Environment and Climate Change

Deputy House Leader for the Official Opposition
Critic for Finance