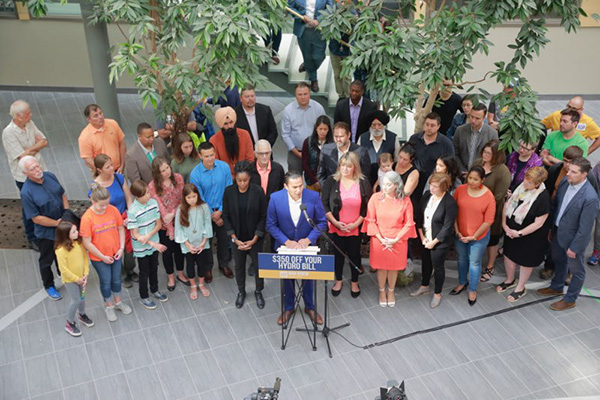 Under innovative climate plan, carbon tax rate would not increase in Manitoba,
and Manitoba Hydro would help create thousands of good careers

WINNIPEG — Manitobans would receive a rebate of $350 on their Hydro bills, while the carbon tax would not increase from the current level, and Manitoba Hydro would be transitioned into a renewable energy company. As a result, life would remain affordable, while clean, made-in-Manitoba electric power would be more attractive and would displace the use of fossil fuels. These are the main elements of a new, improved pollution pricing plan that a Manitoba NDP government would negotiate with the Federal government.

“Our climate plan would make it easier and cheaper to go green. The next time you buy a new furnace or new windows or a new car, you can choose greener options,” said Kinew. “So it will help Manitobans financially. It will also help the province economically. If you are a young person looking for a good career, this plan will help you. If you work in the building trades, or at a company that makes windows, this plan will help you. And it will help all of us — as well as future generations — because it will reduce carbon emissions and help solve climate change.”

This is the proposal that a Manitoba NDP government would negotiate with the Federal government:

• Manitobans will receive a rebate of $350 per primary residence on their Hydro bill. The rebate will help keep life affordable for families while making clean, green hydroelectric power cheaper.

• The carbon tax will not increase from its current level during our mandate, while the effects of our plan are evaluated, meaning Manitobans will not pay any more carbon tax at the gas pump. We will have the Expert Advisory Council review this plan and consult with Manitobans at the end of the first mandate.

• The carbon tax paid by Manitoba families will be returned to Manitoba families in the form of Hydro rebates. Our plan will return the same amount to families as the current carbon tax regime — but it will be better for the environment because it links affordability to a clean source of energy. It will make clean energy cheaper and help families make greener choices.

• 10% of total carbon-tax revenues will be used to help Manitobans make the transition to electric power by providing incentives to help them weatherize their homes, and to fund modern green infrastructure, including public transit.

• Manitobans will be able to take full economic advantage of the opportunities offered by climate change, as the world turns away from carbon fuels and toward electricity. Manitoba’s advantages include a publicly owned hydroelectric utility, which also controls natural gas distribution.

• This plan will create thousands of good careers as demand for electric power grows. It will also support job creation in industries and social enterprises such as home retrofits, windows, electric vehicles, battery development and production.

• We will eliminate Brian Pallister’s failed Efficiency Manitoba and instead offer incentives and programming through Manitoba Hydro. This will include installing fast charging stations at locations throughout Manitoba to make it easier for Manitobans to buy electric vehicles.