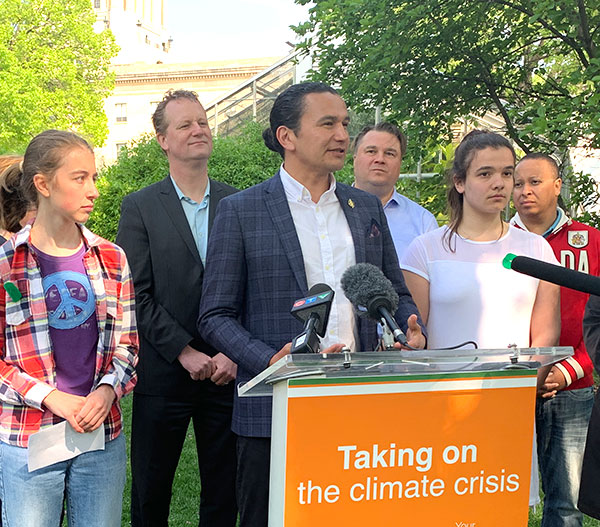 Winnipeg, MB—Wab Kinew and the Manitoba NDP today committed to a science-first approach in the fight against climate change, vowing to reduce carbon emissions by 45% of 2010 levels by 2030 and to become carbon neutral by 2050. The commitment, which will be enshrined in a private members bill introduced Monday, is a first in Canada and would mean a total annual emissions reduction of roughly 1 million tonnes of CO2e per year from 2030 onward.

Kinew’s target would put Manitoba in accordance with the Paris Climate Accord and in line with recommendations from the UN Intergovernmental Panel on Climate Change and. He was joined by members of the Manitoba Youth for Climate Action.

“Stopping global warming is a fight for our future,” said Kinew. “That’s why I’m happy to be joined by the youth today.  They’re an important reminder about why leaders like us need to do the right thing, listen to the science and commit to meeting the targets set out in the Paris Accord. Today we announce our intention to make Manitoba the first province to commit to the Paris target and connect climate science to climate action. In the weeks ahead we will be announcing more details on how we intend to reach that goal.”

In October, the Nobel Prize-winning Intergovernmental Panel on Climate Change issued a dire warning that the earth is on track to warm up by 1.5 degrees Celcius above pre-industrial levels by 2040. The Panel recommended immediately limiting human-caused global warming to 1.5 degrees Celcius, instead of the globally accepted goal of two degrees. Without this shift, the Panel warns society will experience “rapid, far-reaching and unprecedented changes”.

Kinew broadly laid out an ambitious plan to help Manitoba meet the target that focuses on creating good jobs for young people, making big polluters pay and preparing Manitoba’s economy for a more sustainable future. Under Kinew, the Manitoba NDP will use a combination of tools, including public education, creative incentives, regulation and more rapid adoption of clean technology to make Manitoba the first and only province to connect climate science to climate action. Kinew’s plan includes:

Kinew noted the Pallister has failed to set bold goals in reducing carbon emissions and fighting the effects of climate change. Pallister’s plan does not establish an emissions reduction target, does not require that targets are based on scientific findings and only requires the government to publish on annual emissions once every five years. Under Pallister’s leadership carbon emissions increased by 700,000 tonnes of  CO2e in just one year.

“People know that if you want to achieve a goal you need to set measurable targets,” said Kinew. “Pallister’s failed on climate because his ‘plan’ doesn’t even include emissions reduction targets. Only the NDP will halt and reverse this dangerous trend by respecting science-based targets and the Paris Climate Accord.”

Kinew will introduce a private members bill on Monday that would enshrine the 45% emissions reduction target in law. The bill will establish sector specific targets that distribute reductions across Manitoba’s industries. It will also require annual reporting on total emissions reductions.