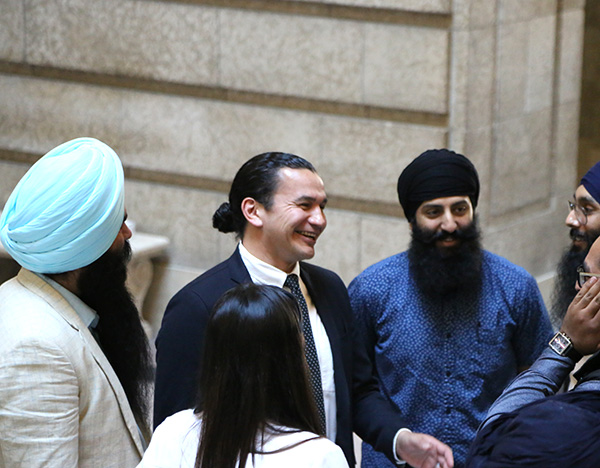 Winnipeg, MB – Bill #228, the Sikh Heritage Month Act passed third reading in the Manitoba Legislature yesterday. The bill, which was introduced by NDP Leader Wab Kinew is on track to become law when the House rises next week.

Kinew congratulated the Sikh community on effectively lobbying for the bills passage.

“The members of Sikh Heritage Manitoba have worked very hard to raise awareness of this bill and the accomplishments of their community,” he said. “I look forward to celebrating with the Sikh faith community next April and every April after that!”

The bill was created in consultation with Sikh Heritage Manitoba, an advocacy organization that works to build awareness of the Sikh experience and highlight the achievements of Manitoba’s Sikh community.  The organization thanked the NDP for spearheading the legislation.

“We are ecstatic to share this milestone legislation pertaining to Manitobans which activated organizers and young leaders within the Sikh community to engage with the political process. Manitoban Sikhs appreciate the unified support from all legislators for Bill-228. A special thank you to Wab Kinew, leader of the opposition and Manitoba's NDP for introducing this historic legislation and seeing it through to the final steps.”